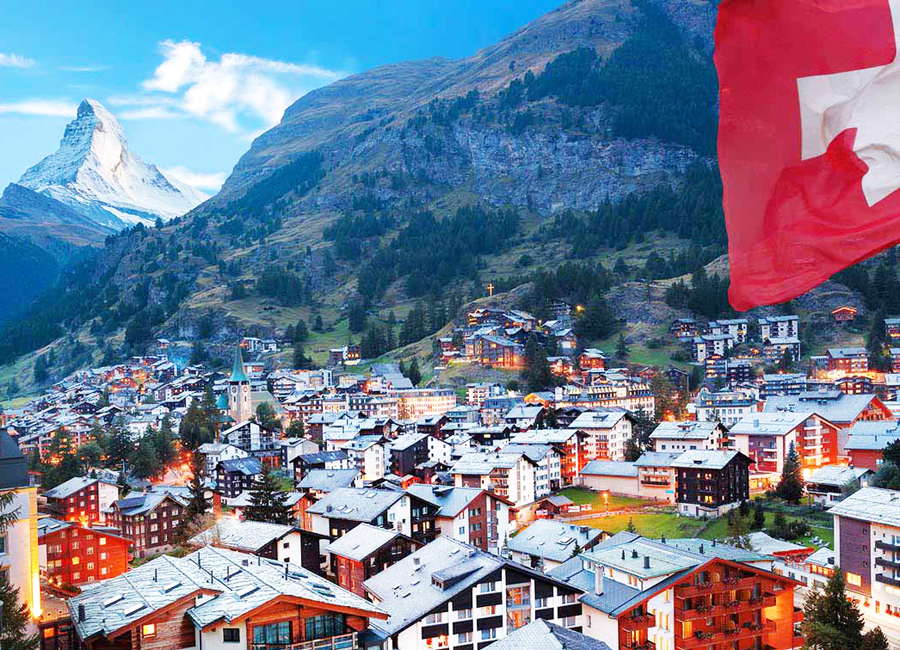 Switzerland is known for its beautiful scenic views and snow capped mountains. People from all over the world; visit the country just to catch a glimpse of the long stretches of greens and glaciers. The country lies in the midst of Central and Western Europe and is landlocked from all the sides. France from West, Italy from the South, Liechtenstein and Austria border it from the east and Germany from the north. The geography of the country is divided between the Swiss Plateau, the Alps and the Jura.

Switzerland is a very affluent country and this truth is greatly emphasized by the fact that every adult in this country has the highest nominal wealth in the world. Moreover, the citizens of Switzerland are known to have the 2nd highest life expectancy throughout the globe. Another highlighting feature of the country is its ties with the Netherlands for the top position in the ranking of most corruption free countries.

With all these assets, anyone will simply love to come to this country and be a part of it for studying and living. The eminent cities of Geneva and Zurich offer one of the highest quality lives in the world

Why Study in Switzerland?

Switzerland is a highly progressive nation and has been greatly hailed for its educational reforms and strategies. The country considers good education system imperative for the political stability, innovations and increase in its wealth. The main resource behind the growth of Switzerland has always been research and knowledge and that is why the country has always acknowledged the role played by the foreigners in its development, business acumen, research and innovation.

The country is recognized the world over for its excellent education system and attracts thousands of foreign citizens every year for studying different subjects. The Swiss universities offer graduation degrees, masters and doctorate in various subjects. The teaching and administrative facilities in these institutions are at par with the international standards and offers high-class quality learning opportunities.

The public institutions generally fund the Swiss universities and the investment in research and education in this country is considered the highest among all the OECD countries. That is the reason why, the country has the highest number of patents registered in its name among all the European countries. Moreover, the country also boasts of the maximum number of Noble Prize laureates. This makes study in Switzerland one of the best options for the students aspiring to study abroad.

All the universities in Switzerland provide their courses based on the Bologna system. According to this system, the undergraduate studies are further culminated into a bachelor's degree, which can be further advanced to a Master's degree and then to the PhD programs. All these educational programs are designed for a variety of areas and cutting-edge research and technology.

You can choose from the vast courses including medical and engineering study in Switzerland. Some of the best universities and educational institutions in the country include University of Basel, University of Fribourg, University of Bern and more. Switzerland has lot to offer, it is up to the student to choose the right field.